LGBTQ students at Georgetown University know how to fight for community.

The most public struggles for LGBTQ community on campus began in the 1970s with efforts to form an officially recognized LGBTQ student group. After repeated rejection, a coalition of Law and undergraduate students decided to take the University to court in 1980. 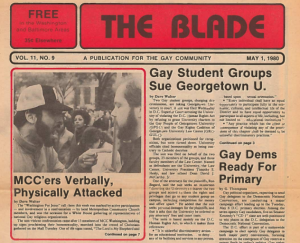 Nearly 10 years of legal battles ensued, debating the essential question of whether a private and Catholic university could claim exemption from the D.C. Human Rights Act and its clause that forbids the “denial or restriction of access to University facilities on the basis of sexual orientation.”

The first trial officially began in 1980 at the D.C. Superior Court with a swift win for the LGBTQ student plaintiffs and their audacious pro bono lawyers. However, Georgetown quickly appealed the ruling, resulting in a back and forth on the results through various levels of the judicial system that took the next decade to settle. 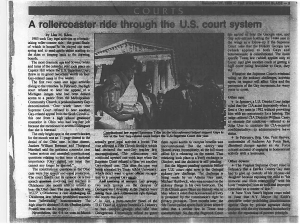 The case reached the highest levels of both regional and federal government, featuring Mayor Marion Barry withholding millions of dollars in municipal bonds from GU, a U.S. Senate amendment that required the D.C. Council to rewrite their Human Rights Act in favor of Georgetown, and the Georgetown administration preparing their final appeal to the U.S. Supreme Court in 1988. Ultimately, after such a prolonged legal and financial struggle, Georgetown decided to heed the D.C. Court of Appeals ruling and pledge equality for gay student groups on campus.

The “Gay People of Georgetown,” eventually becoming known as GU Pride, dedicated themselves to finally creating space for LGBTQ students on Georgetown’s campus. 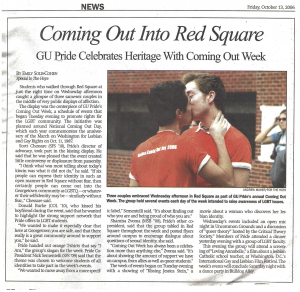 Campus climate improved somewhat over the next 20 years, but by the 2000s Georgetown’s LGBTQ students still faced many obstacles and the campus did not present a safe place to be “out” and open. Determined to change this once again, GUPride began advocating for the creation of an LGBTQ Resource Center in 2001. In response, Georgetown University hired a part-time LGBTQ Services Coordinator in Chuck Van Sant in 2002. The University’s Catholic identity was held up by the administration as a reason Georgetown could not open an LGBTQ Center and employ staff who “advocate homosexual behavior.”

The excuses could not hold students at bay any longer after the fall 2007, when a string of hate crimes against LGBTQ students went publicly unaddressed by the University. 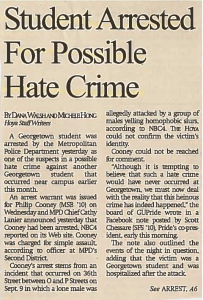 GUPride, in a coalition with other prominent student organizers from all corners of campus, organized a series of petitions, marches, rallies that fall to push for at least two full time staff dedicated to LGBTQ affairs and greater education on and support for LGBTQ issues on campus. The Out for Change campaign of the fall of 2007, as it came to be known, was the largest showing of power by a community that had been stifled for decades.

By the end of that semester, President DeGioia hosted a town hall in which he announced that the University would form three separate working groups dedicated to examining LGBTQ issues on campus, with the goal of ultimately creating an LGBTQ Center on campus. 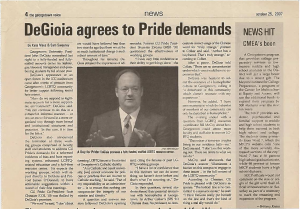 The Center itself was officially established in August of 2008, with Sivagami Subarraman serving as its first director. For over 10 years, it has served as an educational resource for students from all backgrounds across campus, a community space for LGBTQ students to organize, and a home. From the OUTober programming in celebration of LGBTQ history month, to an annual LGBTQ retreat, to the Lavender Graduation, the LGBTQ Center has aimed to further eliminate the ignorance and fear that has harmed LGBTQ students on campus. GU Pride, Queer People of Color (QPOC), and other student organizations serve as advocacy and social centers for LGBTQ students at Georgetown today.